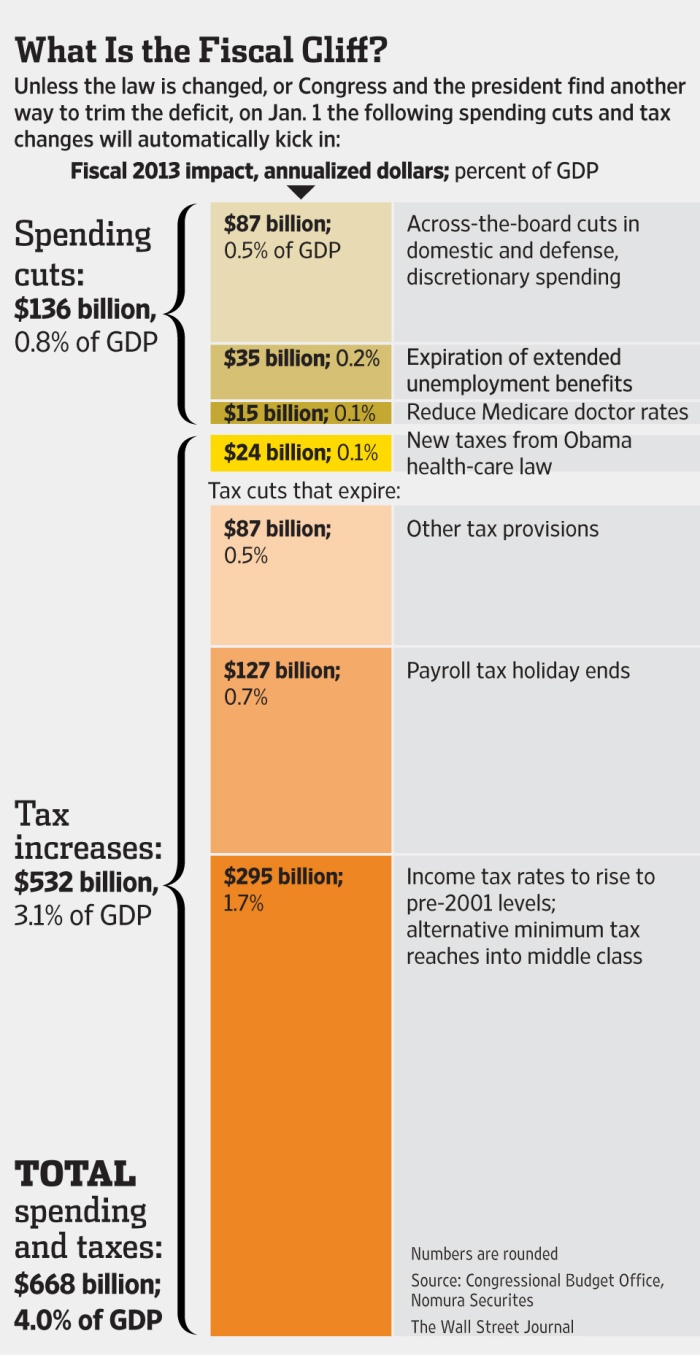 The above table is from the November 8th issue of the Wall Street Journal. The figures for the fiscal cliff consequences are usefully stated for next year and not for the next nine years as those who want to suggest that the numbers are truly impressive (or want to scare children) typically use.

1. If the Congress and the White House do not agree on something before the end of the calendar year, the  first-year consequences will be as the table indicates.  But how likely will they fail to come to even an illusory agreement for the entire year, let alone the next nine years. Not very likely, I should think.

2. Note how the consequences are stacked in “favor” of tax increases and not spending cuts. The “scheduled” spending cuts amount to only $136 billion out of a federal burget of about $7 trillion for next year. The tax increases are $532 billion. The Democrats are horrified that half of these come from domestic spending. The Republicans are horrified that the other half comes from defense spending.

3. It is true that many federal workers under this scenario would face pay cuts of about 8-9%, presumably to ensure that substantive programs can be cut less. These have the political effect of pinching well-organized people immediately who will then let us all know how much they are suffering.

4. The most interesting aspects of the cliff are: First, the GOP agreed to tax increases that are more than four times the amount of spending cuts. Does this portend later tax-increases-to-spending- cuts ratios? Second, the political system can’t seem even to handle relatively small spending cuts. How will it get the fiscal house in any order, especially since no-one (least of all Obama) has prepared people for serious cuts.

5. What I think will happen is this. There will be tax increases of one sort of other and there will be illusionary spending cuts. There will efforts to improve Medicare and Medicaid’s “efficiency” without cutting benefits. They will give impressive numbers to these efforts — over a ten year period, of course. There will be other spending “cuts” — probably just reductions in rate of increase — but even these will be mostly concentrated in the latter half of a ten year period.

6. There will probably be defense cuts for now. But should the US encounter “unexpected” expenses, including any new war, they will be quickly eliminated. Unexpected events that increase the defense budget will definitely occur. The only thing that is uncertain is the precise events that will arise.

7. There is no real political will here. Therefore, even if something that looks good is agreed to in the next few months, it will not last throught the end of the next calendar year. And if a decent economic recovery occurs, watch the politicians find new worthy programs. (One of these “worthy programs”, of course, will be paying more interest on the national debt as interest rates begin to rise.)

Nothing significant will happen to improve the US fiscal situation until the impact of the fiscal situation truly becomes a crisis with sharp economic effects. Too bad. It does not have to be that way.